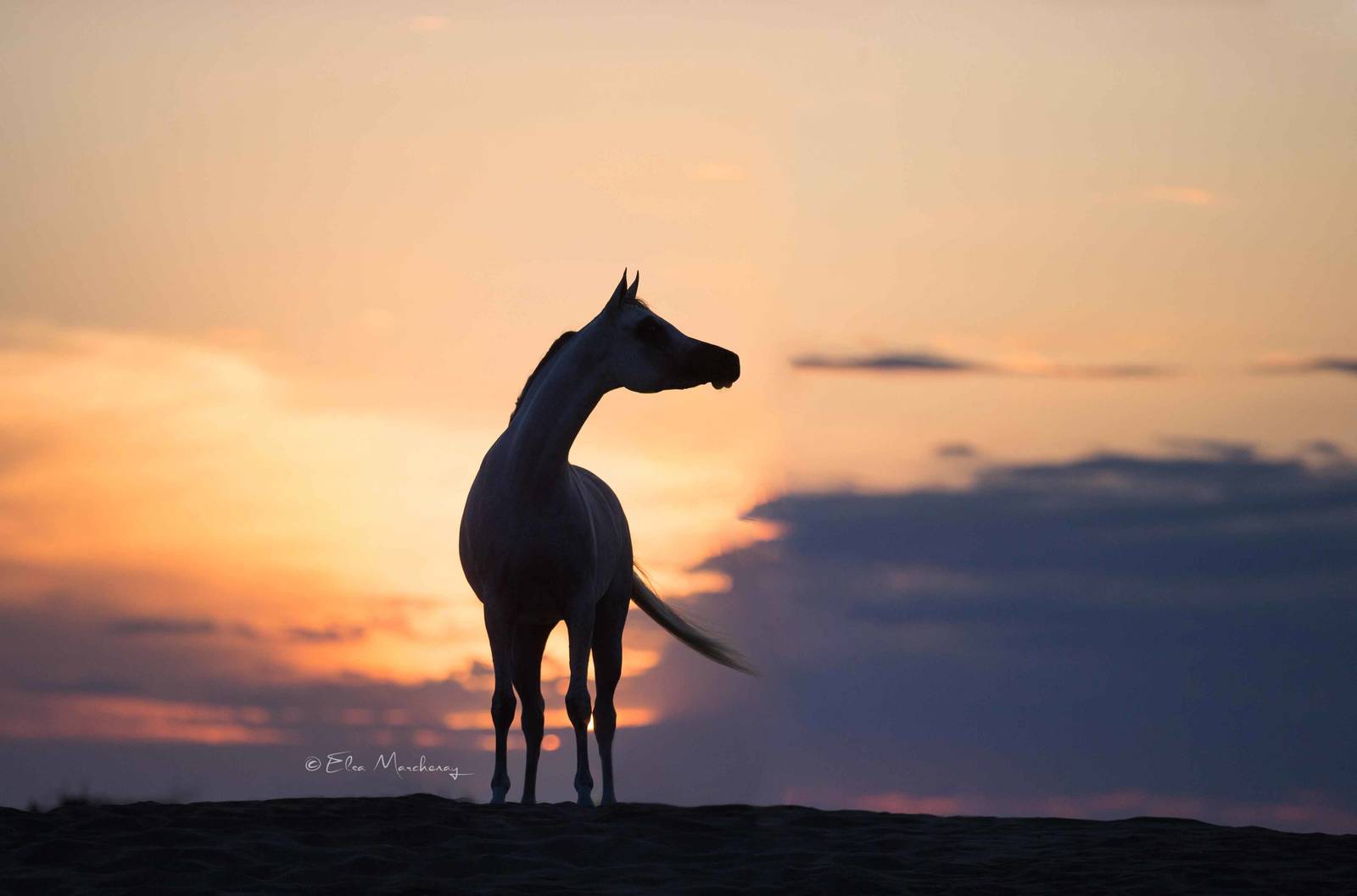 The Arabian horse is considered as one of the oldest breeds, and it is truly international.

This exceptional horse, born in the Middle East, was first and foremost the Bedouin’s companion. A fearless war horse, the Arabian horse was also a valuable partner of peace. The pregnant mares and foals lived in the Bedouin tents with women and children, and this helps explain the Arabian horses’ particular attachment to humans, which is much stronger than in any other breed.

This extraordinary horse conquered the heart of the most important war chief, Napoleon, and slowly conquered the rest of the world.

Each country then decided to make a breeding selection depending on their needs and climate, and this is how the modern lines were created. In the same breed, there are many different standards. For example, a straight Egyptian or pure Spanish Arabian horse does not look like a pure Russian or Polish Arabian. Within each strain, different looks exist.

Today, we can breed these different lines in the same individual, taking the best bloodlines from Egyptian, Polish, Russian, American, French, and Crabbet. The Arabian horse is truly an international breed, with many standards. That's exactly what makes the Arabian breed so rich and versatile, with its diversity in the genes and look. 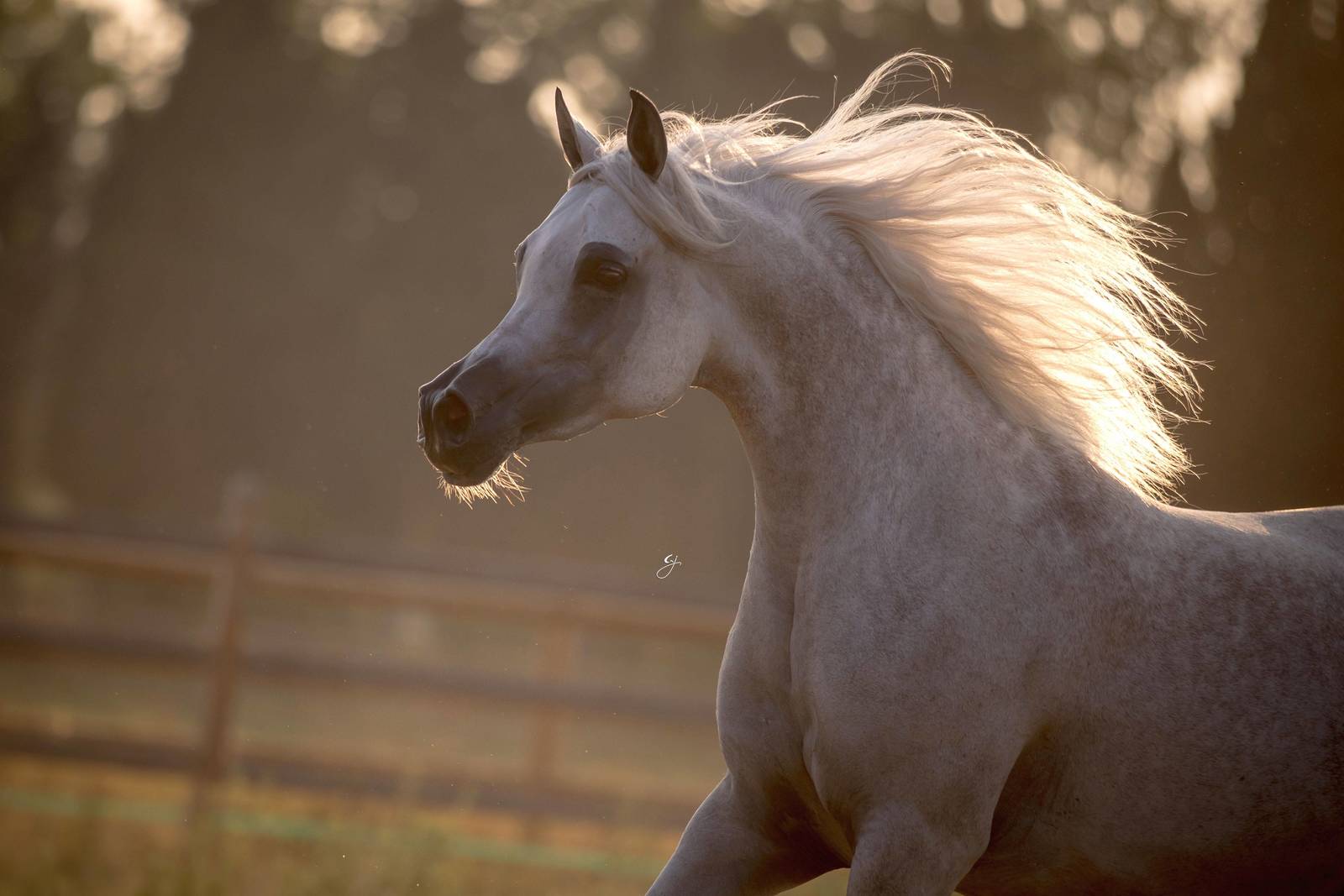 Physically speaking, and including every strain, we recognise the Arabian horse by their elegance and natural grace; their way of moving, light and delicate; their tail carriage; the quality of their skin that shows the veins, being close to blood is the highest noble sign; their swanlike neck; their refined head with big eyes and small ears; their small nose with nostrils that can open to absorb all the air of the world; their proud and his natural pleasure to show off and amaze the crowd with their beauty.

The Arabian horse is a breed to be enjoyed on a daily basis, either as a family or individually. This is the horse, from a mental viewpoint, closest to a human child. They are a light horse, close to humans, friendly, very smart, sensible, and jovial, loving to play, challenge and learn. It is the most resistant horse, being the best endurance horse in the world. They are fast, with the Arabian horse being the founder of the flat race thoroughbred. They are full of life, needing regular exercise to feel fine, and versatile. Thanks to their heart and body, the Arabian horse is ready for anything: they are the Ferrari of the equine species.

The Arabian is also the perfect horse to create a strong, special, and unexplainable connection. They are a good match with people with real sensitivity, who can listen to them and open their hearts to them, while also being firm with kindness.

The Arabian horse is not suitable for close-minded people who are looking for a horse that can be controlled, restrained, abused, and brainwashed.

A final warming – discovering the Arabian horse means falling in love with the breed ! 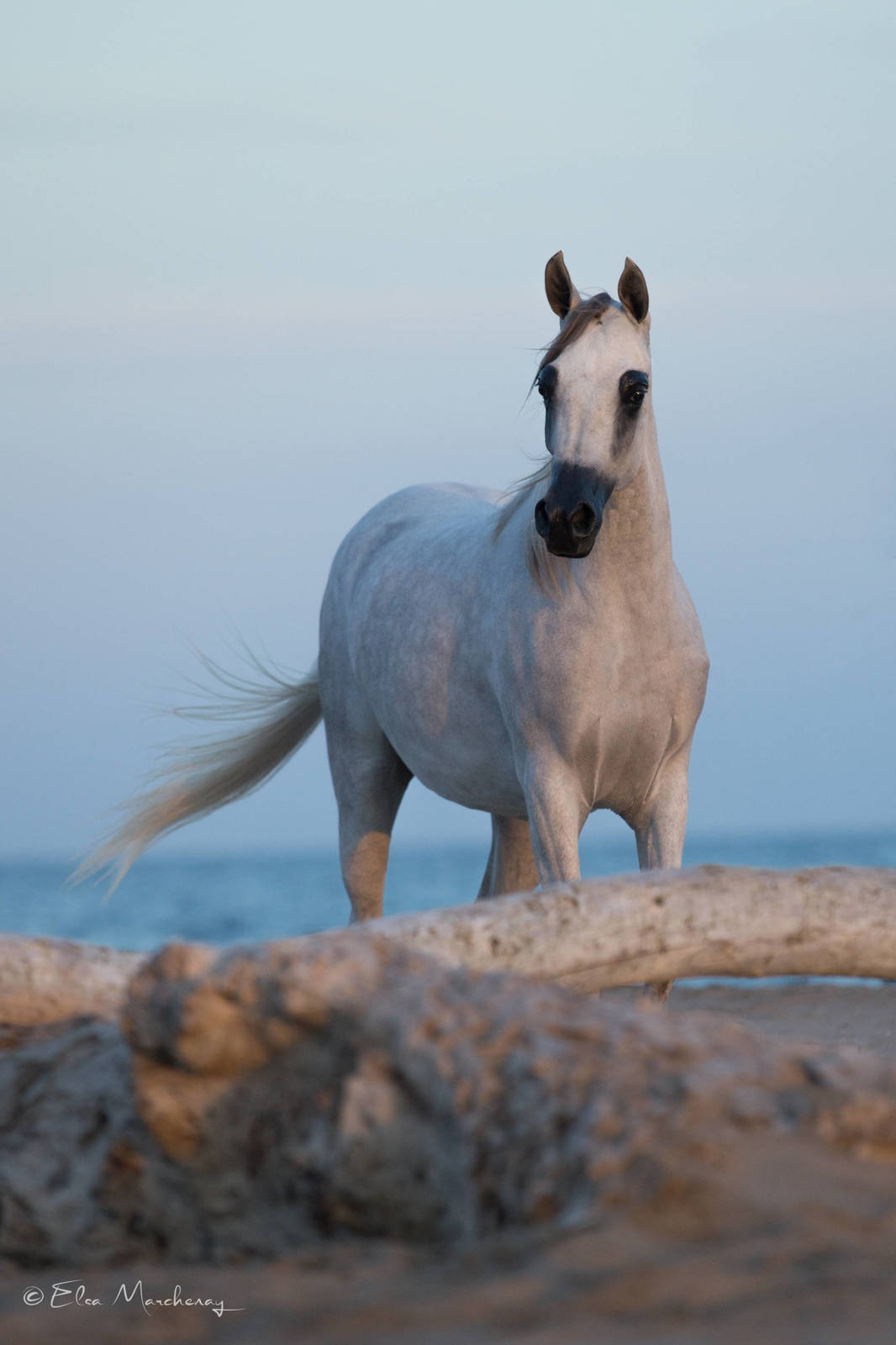 Legends about the Arabian horse

The legend of creation :

God took a handful of south wind, blew on it and said: "I created you, Arabian: I attached success to your forelock; I've put on your back the wealth of the spoils; I've put treasures on your flank.

“I will create from your essence, a new being who will become the proud of my elect, the kindness of my enemies, the adornment of my servant..."

Never a promise has been so well kept. The first Arabian rider was Ismael, the son of Abraham and a Bedouin ancestor. 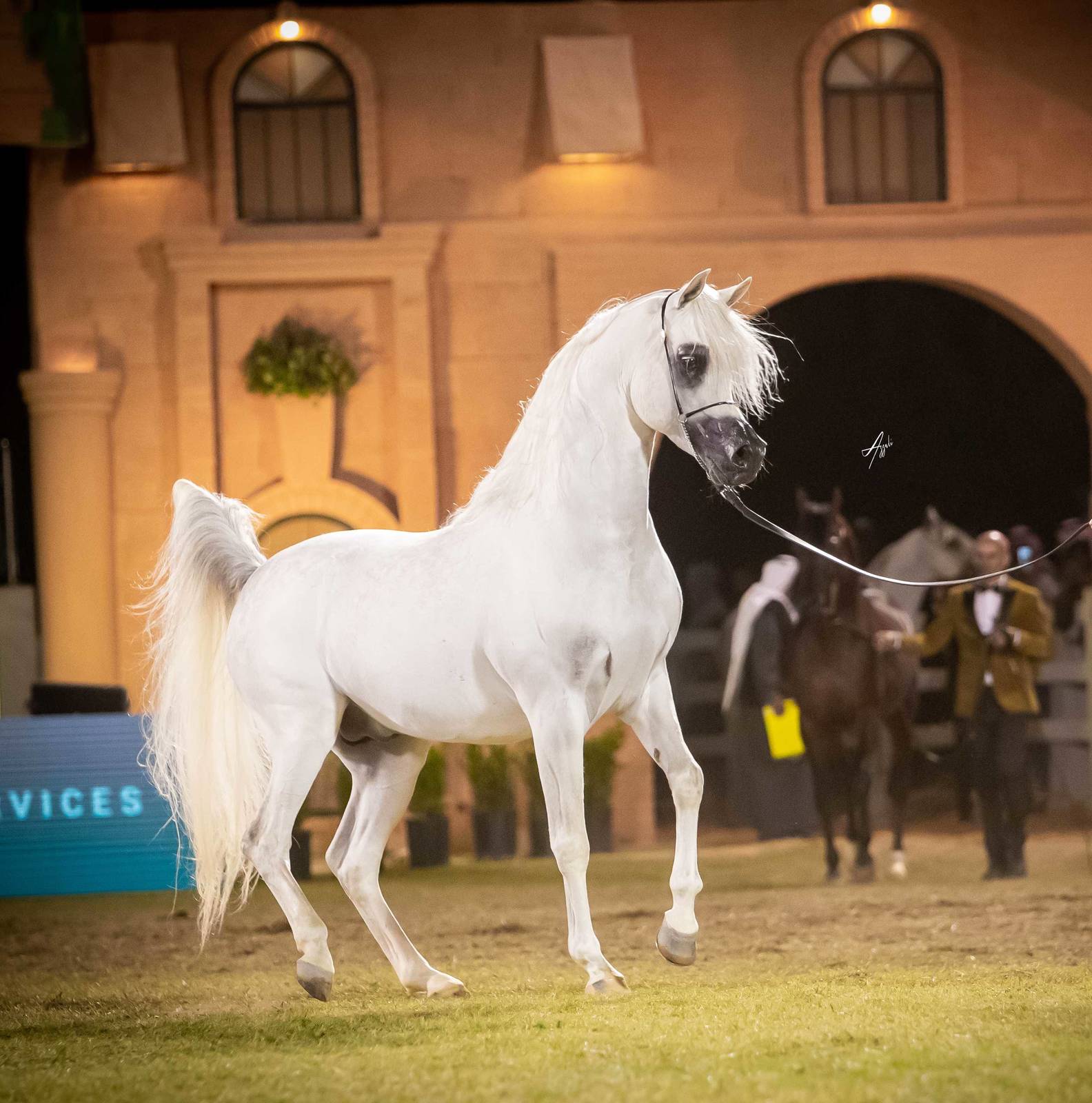 The legend of the five: Al Khamsa

After a long and difficult journey across the desert, the prophet Muhammad guided his heard of thirsty horses to an oasis. All the horses rushed to the water. At that time, Muhammad called them back.

Only five mares answered to his call, the other chose to satisfy their thirst. To thank their loyalty, he chose those five as his favourites and named them

Al Khamsa ar-Rasul Allah – the five messengers of God. Those mares became the founders of the first five strains of the Arabian horse.

A long time ago in the desert lived Ahmed, chief of a Bedouin tribe. His most precious asset was his Arabian mare that everybody was coveted, but he could never give her away. Instead, he decided to breed her to an exceptional stallion and chose the best one from the Sultan.

One day, while Ahmed and his mare were traveling in the dunes, they met an adverse tribe and were chased. The mare was slowed by the foal she was carrying as she was close to give birth, but she understood she had to fight for the life of her master. She used all her strength and heart to race and slowly, slowly gain some ground. Then, the last gunshot touched Ahmed and he fell on to the neck and shoulder of the mare. She made it her duty to carry her master back to his tribe. When she arrived, the blood from her master had stained her neck. Because of this mare, the tribe could honour their master with dignity, but they realised that the blood marks stayed on her coat and would not go.

That night, a foal was born with the same blood mark from the neck and shoulder of his mother.

A few horses today still have those same marks. They are considered the best partners, exceptional beings, and living legends. 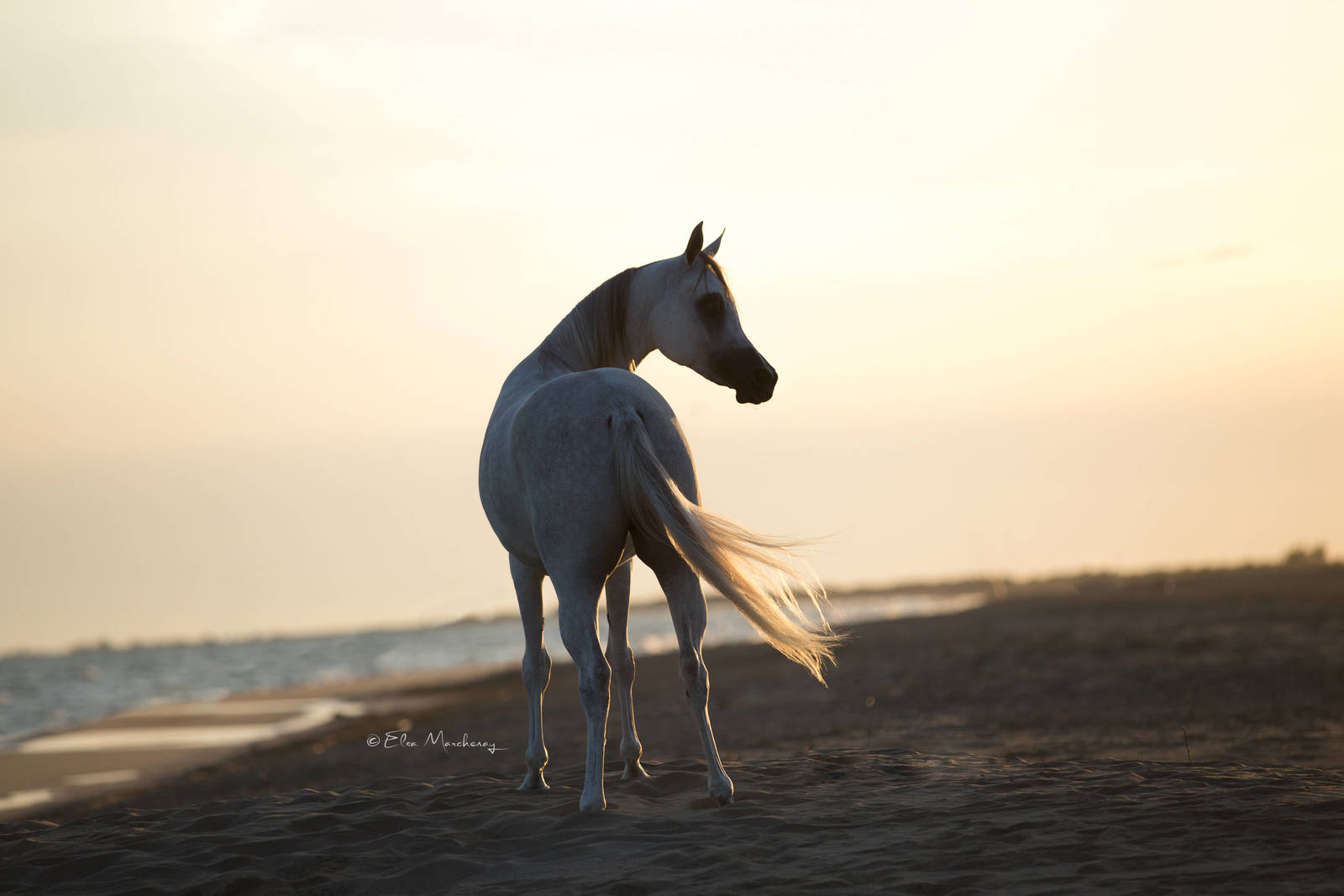 A few Arabian horses that made history :

The Godolphin Arabian, the Darley Arabian, and the Byerley Turk – the three Arabian horses that created the thoroughbred racehorse.

Gazal Al Shaqab, Marwan Al Shaqab, WH Justice, Versace, and Bey Shah – our modern chief sires not only in the show ring, but also in endurance and pleasure riding.

Pierraz – the second cloned horse in the world.

And so many others !

Now it is your turn to come and discover our future legends here at Kalliste Arabians ! 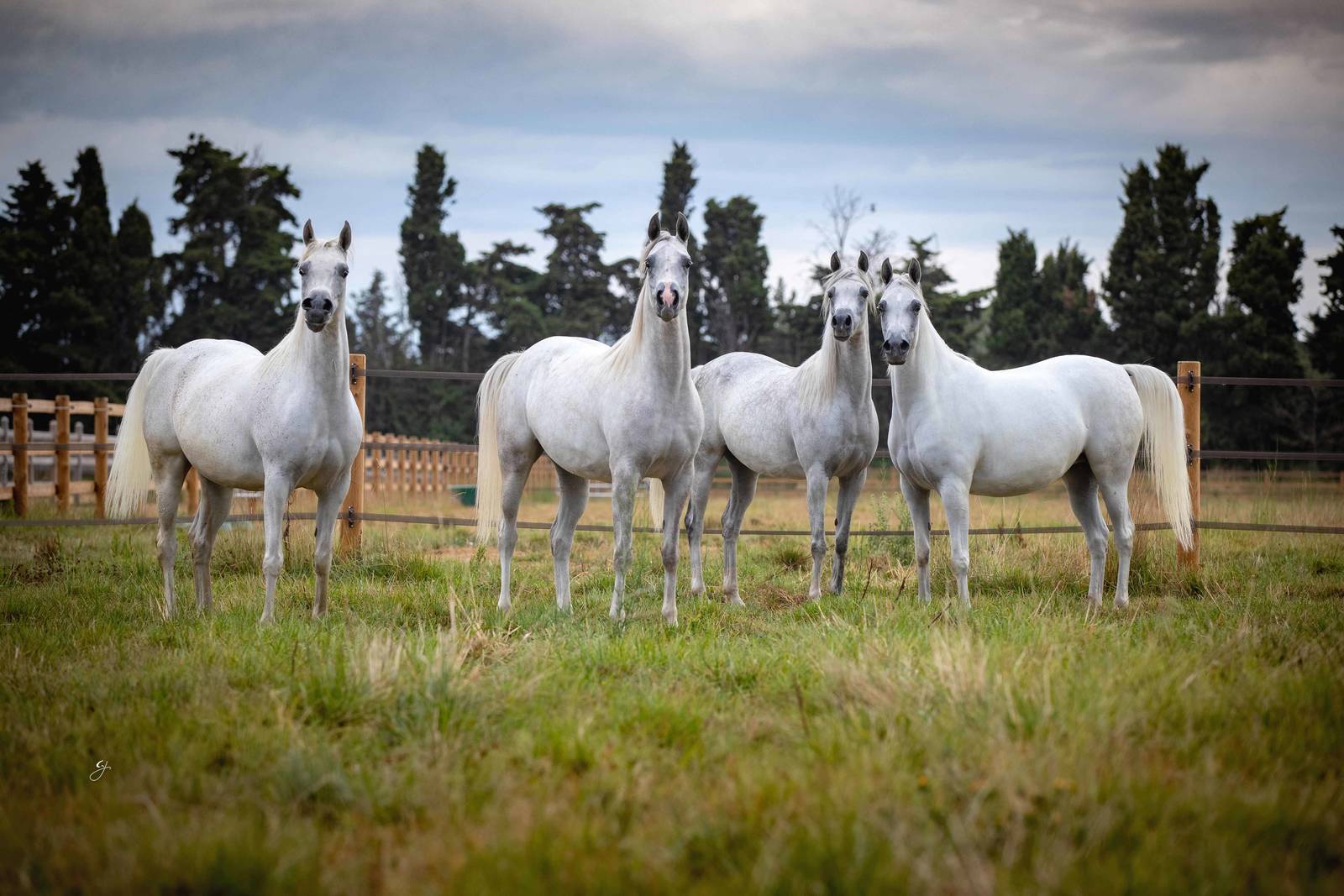